Difference between revisions of "Chapter 1"

The painting on the cover is titled "Eternal Summer," by the artist Darshan Zenith. Official site. Zenith subtitles the painting "A 'Retired' Caddy Hearse Greets Daybreak at a Beach Surf Shop." Prints of the painting can be purchased here. More info at Thomaspynchon.com

Pynchon himself wrote the copy to the book jacket description of Against the Day (text here). It is possible that Pynchon did the same for Inherent Vice.

Like Against the Day, Inherent Vice has no dedication. Pynchon dedicated previous novels to friends and family: Mason & Dixon ("For Melanie, and for Jackson"), Vineland ("For my mother and father"), and Gravity's Rainbow ("For Richard Fariña").

Country Joe & the Fish T-shirt
A Berkeley-based rock band most widely known for musical protests against the Vietnam War, from 1966 to 1971

Shasta
Shasta is a soft drink brand that reached the peak of its popularity in the 1980s. Wikipedia. Note that Pynchon has named characters after soda before, e.g. Wicks Cherrycoke in Mason & Dixon.

Shasta is also the name of a town in northern California, near Redding. Google Maps

They stood in the street light through the kitchen window there'd never been much point in putting curtains over and listened to the thumping of the surf from down the hill. Some nights, when the wind was right, you could hear the surf all over town.


Like Vineland, and Gravity's Rainbow, here a Pynchon book begins with light coming through a window. Also like Vineland, the sentence structure and rhythm is just slightly jarring - that '...in the street light through the kitchen window...' seeming to echo Vineland: "Later than usual one summer morning in 1984, Zoyd Wheeler drifted awake in sunlight through a creeping fig that hung in the window, with a squadron of blue jays stomping around on the roof." In both cases, it's just a little odd that Pynchon doesn't refer to the light 'that shone' through the window.

1959 Cadillac Biarritz
a luxury version of the Eldorado. Wikipedia.

Freak Power
Hunter S. Thompson ran unsuccessfully for mayor and sheriff of Aspen, Colorado in 1969 and 1970. Wikipedia Unsure if "freak power" was a term Thompson coined?

Godzilla
Pynchon apparently wrote a letter to his editor, Cork Smith, in the 1960s saying that he was working on two books: one on Mason & Dixon, and one loosely inspired by Godzilla. See Crying of Lot 49 Chapter 3].

1968 El Camino
The Chevrolet El Camino is a coupe utility vehicle produced by the Chevrolet division of General Motors from 1959 through 1960, with production resuming in 1964 and continuing through 1987. Wikipedia 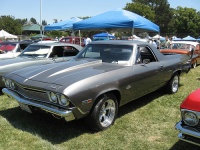 Donald and Goofy
The cartoon being discussed here is "No Sail" from 1945. Available on Youtube and the Chronological Donald Volume II DVD Amazon.

"...in fact he's always had to go in every day and shave his beak."