NOTE: You can view Inherent Vice cover art over time at ThomasPynchon.com.

The cover illustration is by Maui artist Darshan Zenith (see his Official site). The piece is called "Eternal Summer," and subtitled, "A 'Retired' Caddy Hearse Greets Daybreak at a Beach Surf Shop." Prints of the painting can be purchased here. The 1959 Cadillac Hearse is parked in front of the "Endless Summer Surf Shop" (namechecking the Beach Boys Greatest Hits collection and Bruce Brown's 1966 surfing documentary!).

The way Darshan creates his pieces is quite interesting. He paints only the background of the image (the sky, sea, palm trees &c.) and scans the painting into his computer. He then uses 1:18-scale metal diecast models of the cars, photographed against a white background, and loads the digital photo into the computer. From this point on, it's all Photoshop, integrating the car image into the background painting, and then creating the details with Photoshop tools. So the final work is a digital creation, and there is no original painting of the work. I was told that the basic structure of the surf shack was also part of the original painting for the Caddy Hearse piece. Also, Darshan apparently had the 1966 Bruce Brown film in mind when naming the shack "Endless Summer."

Apparently, Pynchon was searching the Web for the right image for the Inherent Vice cover, found the Cruiser Art website and the "Caddy Hearse" piece, and wanted to use it. [source?] Penguin contacted Cruiser Art and obtained the appropriate permissions.

Update: Cruiser Art sent along a link to the same model they used for the painting, now on sale at ebay. It's a 1959 Cadillac Crown Royal Limousine Style Hearse. Steve Rummel, Darshan's business partner, adds: "We painted the landau top white. Notice it comes complete with a casket, but we couldn't figure any way to use it."

The book jacket design is by Darren Haggar and Tal Goretsky. The font used in the neon title is called Drescher Grotesk. 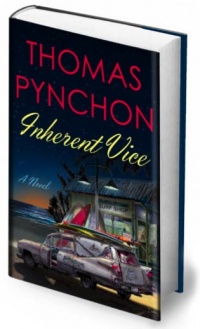 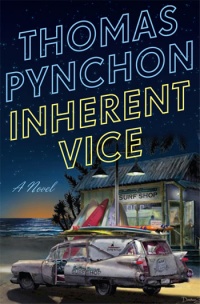 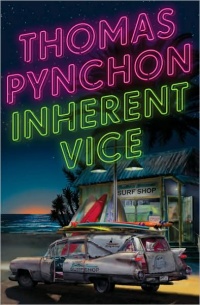 Posted on Amazon prior to publication, a bit brighter than the final cover and missing the text "A Novel" on the left
Retrieved from "http://inherent-vice.pynchonwiki.com/wiki/index.php?title=Inherent_Vice_cover_analysis&oldid=2218"